Enterprise BDD? What does it mean?

Practicing in a traditional software development approach, business, developer and tester were everything, but amigos. Being and acting in silos, without sharing the information across borders and using a disconnected tool chain resulted in the majority of the projects in delays and failure of delivering the product.

Now looking at the agile software development approach such as Scrum or Kanban, you will find the same personas. They have changed and adjusted their roles, responsibilities and style of working and have removed the silos by collaborating more often together to deliver a better quality software to drive organizational business.

Business, developer and tester have transformed from different silos to an agile team with cross functional responsibilities and more open minded culture in communication and implementation.

Even emotionally the business, the developer and the tester have come closer to have the same understanding, but aren’t amigos yet. Still there is room for improvement in communication and the expectation on the product being delivered.

With Behaviour Driven Development (BDD) we have targeted the right direction within software development. Using higher frequency of the feedback loops between the involved personas BDD is targeting on the spot of the cost of translation. Using defined framework with keyword all involved personas can embrace BDD to speed up the pace of delivery. One language, one way of working, on understanding, results into reduction of cost of translation.

In a BDD practicing culture, business defines the requirements based on a predefined language called Gherkin. Gherkin has a set of keywords business can use to describe all precise content of the requirement in so called scenarios. Scenarios are defined in a feature file.

A feature file is:

This way, the 3 amigos can collaborate much faster to drive common understand of what is being expected, developed and verified.

BDD from the visionary perspective is providing huge advantages to an organization practicing agile approaches, by keeping the cost of translation to a minimum and the pace high of software delivered to the consumer with high quality. The challenge BDD is facing is around the technology layer – how it can be integrated and practiced by an enterprise organization. Currently there are a lot of point solutions used providing value for individual projects in an agile environment, such as:

Project A is working with:

Project B is working with:

Project C is working with:

Project D is using again a different constellation… and so forth.

Even these projects are practicing BDD, from an organizational perspective they are working completely isolated from each other. Cross collaboration approach is lacking between the projects. 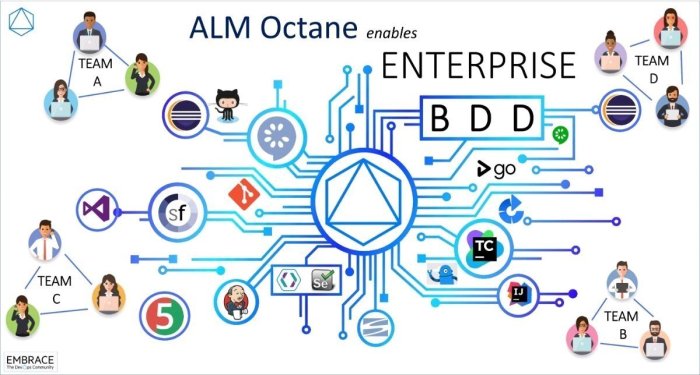